Earlier today I took one of those surveys that people post on Facebook. This one was “Who are you in a group: The Leader, Voice of Reason or Entertainer” Before I took the test, I knew what I’d get, what I always get, “Leader.” So it was to my surprise when the test gave me “Entertainer.” But as I think about it, it now makes sense and actually I’m kind of proud.

Allow me to explain:

One of my tasks when I decided that I honestly desired to be in a life lasting, loving and healthy relationship was to tap more into my Divine Feminine. I wanted to be so connected to the woman in me that it’d be easy for me to trust and recognize the perfect Masculine Energy for me when it arrived. In my past relationships I’ve always worn the pants. That was a dysfunctional behavior. Although it kind of felt natural to me I knew that it wasn’t and I didn’t prefer it. My soul yearned for balance. I knew that in order for the union I wanted to be successful, I’d have to get comfortable with lessening my dominant attitude in the area of an intimate relationship with a man. I needed to learn how to be comfortable and confident with not being in control all of the time. I knew that I also would have to learn how to trust my future partner in regard to doing things for me, especially financially without my feeling like I was being weak. I’d have to learn how to purr instead of roaring. 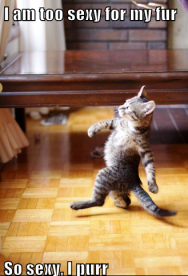 It’s not that I was a control freak, that’s not it at all. It was just that I always chose men who I had to support, fixer uppers so to speak. Also I grew up with brothers that gave me everything I wanted. I’ve never had to depend on anyone else for anything. In my adult years, I maintained that lifestyle and that mentality. In some situations, for example parenting, I haven’t had a choice.

But as I sat in my personal office aka the bathroom (the best thinking place in the universe) I was looking at the post again and other ladies had posted that they got “Leader!” I’m like what the heck is going on? I’m whining to myself at this point, “I’m a leader too…boo hoo!” Then it came to me, the light went off!

Do you guys remember “Texas Tea?” I did a Vlog and I spoke of how I felt about him. Well we became official on my birthday last month and I’ve been having the time of my life getting to know him and us. What I didn’t realize until now is that from time when we first began to converse I assumed the role of the woman with him naturally even before we became a couple. I knew in my heart he was the One. My soul must’ve known it too because I took the super woman cape off and put on the maxi skirt as soon as he arrived. Mmmm, it feels good to say that. So needless to say I’m happier than a crack head on the 1st of the month to be the” Entertainer.” Besides I’ve been a leader all my life, I’m glad for a break. 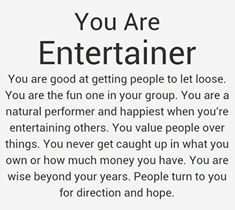 Until next time sweet babies,

(If you take the survey, come back and leave a comment stating what you got and if you agree or disagree : )

“She wonders if the love of self is enough when her heart yearns to be shared with someone else. No matter how much she feeds her spirit, the void exists. Her soul, it misses him deeply but her mind doesn’t know who he is. She wishes to hear his voice, to feel his touch, to be comforted by his kiss. His energy has never been there. Does that stop his spirit from feeling she? Can he? Does he feel her the way that she feels he? His absence causes her to yearn continuously. Why is it taking so long for him to arrive? What is he afraid of? She’d never hurt him, only cherish, adore and protect his heart from strife. Doesn’t he feel within the depths of his being that she needs him? Her heart’s thoughts ~ Void of time.”